Egg is a race of creature shared between the Water, Darkness, Fire and Nature civilizations.

In Episode 1, only 2 creatures with the egg race existed; Dragon Flare Egg and Hunting Gaia Egg.

Both of these creatures have a mana cost of 3, 1000 power, and an effect to put the top card of your deck into your graveyard. If it is a non-evolution creature of a certain race, you may destroy the Egg creature and put the other card into the battle zone.

In Episode 2, DMX-13 White Zenith Pack introduced a Darkness creature with the Egg race that can bring a non-evolution Zero creature into play from the bottom of your deck.

In Episode 3, DMX-15 Full Foil VS Pack: Virtueless Royal introduced a water creature with the egg race that can bring a non-evolution outrage creature into play by destroying it. 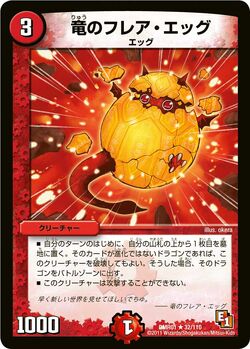