Dynamo is a race of creature that is shared between all 5 civilizations.

The majority of Dynamos have the Dynamo keyword, which allows them to tap themselves to add their power and abilities to other Dynamos at the beginning of a battle or when they can attack. The race is always paired with the Dreammate or Great Mecha King races, with the exception of Supernova Uranus Ninetails, Ultra Man, and Ultimate Man.

Due to the nature of Dynamos, most Dynamos can be considered a supporting and supported card. Only Dynamos mentioning other Dynamos in their effect are listed here.

Creatures that evolve from Dynamos 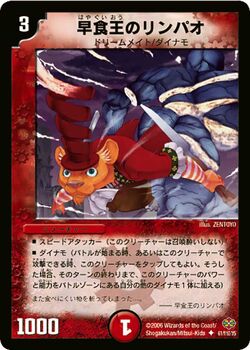