Duel Warriors are a series of important characters who appeared in Duel Masters (2017) season of the Duel Masters Anime and Manga series.

Duel Warrior are creature spirits who wandered off to the human world. At the time of the new generation, the balance of the creature world was starting to collapse. This results in creature spirits arriving to the human world in order to escape their circumstances in the creature world and live a free life. However, they sometimes caused troubles. So far, all duel warriors who appeared in the anime are of the Specials race.

Duel Masters can stop them by Initiating a "True Duel" with them. Unlike a regular Duel, shield breaks in True Duels casue physical damage to the duelists and the loser of the duel might die. This is similar to the duels that former Duel Masters Shobu Kirifuda and Katta Kirifuda faced when involved in conflicts related to major antagonistic personalities such as Zakira or Izumo. When a Duel warrior is killed or sent to the creature world, all phenomenons related to them will also disappear as well.

As Deckie directly forces Joe Kirifuda into these duels and thus directly putting him and the Duel Warriors in danger, he is often seen as ruthless and cruel. This also indicates that his moral standards greatly deviate from human standards. He also intended to kill all duel warriors encountered and forces Joe Kirifuda to do so,[1] but fortunately the direct attack against them can be stopped[2] and the duel warrior can be sent back to the creature world instead, allowing a short truce to happen between them and the Duel Warriors.

While Joe Kirifuda and Boltz releases duel warriors by stopping the direct attack, Kira actively kills Duel Warriors as he considers them as "Evil". While in the Manga he does it much more ruthlessly, in the anime he did consider for a while before he killed the Duel Warrior and the one that he faced there was literally an evildoer who controls other's minds, scams people out of money and spends them on luxuries. However, he did kill the second one he encounters much more ruthlessly.

So far, all events involving Duel Warriors involve Uraraka Momo, often with her being one of the victims of the Duel Warriors because she tried to take a snapshot of them or their properties with their phone.

No Duel Warriors originated from the Light Civilization.

In the Twinpact Arc, Duel Warriors no longer appear in the real world, but creatures such as Bikkureeno and Do Mannakataro are able to manifest in the human world themselves.

While not appearing in the anime, Mukade, Asura has entered the human world but was repelled by an unknown duel master. Also Octopa, Sublime Knowledge and Jari, Misfortune Demon 27 can be seen defeated by Kira in the anime. 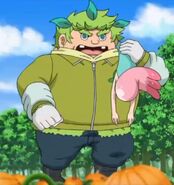 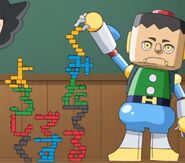 Sasorimukade, Asura
Add a photo to this gallery

Retrieved from "https://duelmasters.fandom.com/wiki/Duel_Warrior?oldid=326989"
Community content is available under CC-BY-SA unless otherwise noted.