In this series the traditional usage of cards are no more, instead the cards are put into a new deck holder which reads the cards and transfers data to a virtual headset gear which provides information on cards and gives memorable options on every card details and brings out virtual reality experience of creatures and spells, for more immersive playing experience. The game is controlled via gestures and voice.

Virtual Reality Head-Gear
Add a photo to this gallery

The story revolves around Teru Yumemi and his older sister Cocoro Yumemi and their friends who met Rei Kukami. Rei is a descendant of a family who holds the mysterious pendant ARC which holds the the Great Spirit of Duel Masters. Rei and her family protect this pendant from the clutches of the evil organization known as Nest. Rei doesn't trust anyone so she fights this organization on her own until one day when she was cornered Nest, Teru and his sister saw her and helped her out of the situation. She finally saw the honest boy with such a great spirit whom she felt she could finally trust. She decided to bring them to her grand father Kenshiro Kukami, who owns a dojo in which he teaches Duel Masters card game. Teru decided to become stronger from learning in this dojo, so he could not be overshadowed by his older sister and would finally have the power to protect his friends. 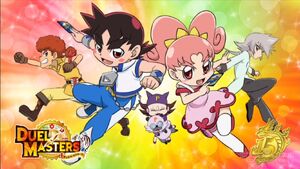 Retrieved from "https://duelmasters.fandom.com/wiki/Duel_Masters_Flash:_Episode_Listing?oldid=351277"
Community content is available under CC-BY-SA unless otherwise noted.