Sets are either named after Joe Kirifuda or the Jokers race or the keywords introduced in the block such as Labyrinth or Bad Action Dynamite.

It also features promotional cards from Year 16 as well as SpDeck3.

After Final Dogiragolden's war against Dormageddon X, Forbidden Armageddon and his forces ended, all life on the Dragon Saga world was wiped out. In place of dragons, new lifeforms had flourished.

These new lifeforms are the Metallica, Mutopia, Mafi Gang, Beat Jockey and the Gransect. All of these races are 1 race consisting of multiple types of lifeforms.

This changed world is connected by a pillar with Light, Water and Nature in the top of the pillar and Fire in the most bottom of it. Darkness was excluded from the pillar and covers the rest of the world.

There are also the Jokers, who are colorless like the Zeniths. Nobody knows why they are there but the Beat Jockeys have encountered them personally.

It is a block aimed at "returning to the origin" of the game, featuring a block icon of DM referring to the game itself D(uel) M(asters), classic civilization conflict, revival of forgotten races and creature types (Such as Insects, Plants, Sealife and Abstract Objects), and revivals of old creatures such as Roaring Great-Horn and Super Explosive Volcanodon.

The new environment of DMRP-01 introduces a few new races and strategies, but only Jokers made it to the top due to its powerful one shot quick kill abilities using Jolly the Johnny which allows a quick win with Nothing Zero, Secret Destruction, Danganoh, Super Special Q which can break all the opponent's shields in turn 4, and sometimes the player can even use Yattareman or The Ramen to cast 2 Nothing Zero, Secret Destruction and break all the opponent's shields at once. Niyare Get, Zero Trick also assisted these types of decks a lot as it is a 3 card hand replenishment in turn 2.

Aside of that MaltNEXT and Goemonkey Loop continued to exist in the metagame despite restrictions, and became the top tier of the metagame themselves.

Rosia Miradante and Dormageddon X continued to exist and Redzone evolved into a more stable Water Fire Redzone decktype with Onikamas, Strange Flow as a additional method to stop for no cost tramples. Onikamas also allows this type of Redzone to stop rival for no cost tramples. Onikamas is also extremely difficult to remove and thus Dogiragon Buster 3 turn kill, Cylinder Miradante and other for no cost rushes that do not have any way to remove it dropped out of favor.

Due to the disappearance of Mega Manalock Dragon and Evil Heat, Screaming Demon Dragon, Dogiragon Buster decks made themselves into a variant where they would use multiple civilizations and hyperspatial spells and also sometimes Cyberdice Vegas, Gambling Expert of D and Hyperspatial Gallows Hole for defense.

In the other hand, due to the appearance of Bad Brand, the Beat Jockey deck type ascended to the lower meta category, being able to rush most decks with impunity.

With the release of Bad Brand, a new decktype known as Water Fire Bad Brand quickly replaced the mono-fire variant into the top of the meta. It involved summoning a water creature in turn 2 or 3 then sending out Magnum, Shortshot and Nine, Zero Zero then summoning Bad Brand for 1 mana, then use revolution change on the water creature into Rafululu, Sound Faerie in order to totally lock the opponent's defenses.

Due to this, most of the metagame's decks have the ability to ignore defensive plays, be it via loops, instant kill combos or one shots that prevent creature or spell triggers.

The other flagship card, Ov Sidia failed to make metallicas enter the metagame, but Orlilia, Flash of Justice was seen in a few Light Fire Redzones. Seeing the destruction of Goemonkey Loop, ramp decks and rogue decks are also seeing a return. MaltNEXT stays in the metagame despite the restrictions.

The Chronicle Legacy Decks in August revived the Shinobi Dolgeza decktype where it would receive new Shinobis and also had lots of Giant support. The Alcadeias King Queen lock however, has not entered the metagame due to its slow speed. However, King Alcadeias, Dark Gaia is seen in Five Color Jolly the Johnny Joe as a sub finisher. The flagship card Alcaclown, Heavenly Crime Fallen General proved as a strong candidate for Christie Gate, increasing its price. However, due to Onikamas, Strange Flow, the combo was not strong for competitive gameplay and Alcaclown ended up as a sub finisher for Five Color decks based on Wild Safari Channel, D of Great Revolution. The other flagship card was Dolgeyukimura, Last Ninja, which besides empowering Shinobi Dolgeza, also helped create the Dolgeyukimura Loop deck.

In August, the appearance of Keshikasu, Vanish King has gave way for a new type of Jokers deck; Control Jokers. This deck utilizes Keshikasu to control the opponent's creature movements and aims to win using Jolly the Johnny. This is an impressive feat where a Coro Coro Promo gave way to a new decktype.

Before the set is released, a new anti meta card known as DG ~Time of Judgment~ has appeared. Its appearance easily results in the death of most unprepared ramps, although after it, Ramps such as Goemonkey Loop and Five Color Jolly the Johnny Joe continued to persist.

When the set is released, Shakogairu, Water Academy No. 9 has attracted attention among Goemonkey Loops and other Jack, Bei B loops such as ones using Metallica. It is immune to the opponent's invincible creatures, and doesn't trigger effects such as Forever Princess, Eternal Ruler which prevents cards such as Grateful Life, the Earth Breaker as an effective finisher against decks using it.

Other cards that received attention include Gustav Albussar, who has been used in a few reanimation decks to spam large finishers with Skullbent Gades. Water Nature Dueland has also made a stunning appearance into the meta as while luck based, it was very consistent and resistant via defenses such as Ninja Strikes and Cyberdice Vegas, Gambling Expert of D and also has powerful control abilities.

While Fire Jokers did not make it to the current metagame, they were proven to be a force in the Block Metagame.

With the release of DMEX-01, Aquan Mercator had managed to return Five Color Dogiragon Buster back into the metagame, while The End of Universe, Infinite Galaxy became a fan-favorite finisher for Light Nature Metallica.

With the March 1st Hall of Fame update, a variety of decks had been heavily crippled, such as MaltNEXT, Rosia Miradante, Jokers (deck), Water Fire Bad Brand, Water Darkness Discard, Justice Innovation, Goemonkey Loop and Light Nature Metallica, many of them weakened up while a few became downright unplayable. Decks based on Dogiragon Buster, Blue Leader such as Water Fire Dogiragon Buster had managed to survive the restrictions due to reinforcing from Dorgan Churis which allowed them to perform a Revolution Change on the third turn.

DMRP-04裁 The Rise of Master Dragon!! ~Judgment for Justice~

DMRP-04魔 The Rise of Master Dolszak!! ~Demon Phoenix of Moonless Night~
Add a photo to this gallery 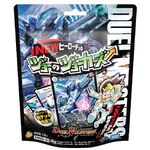 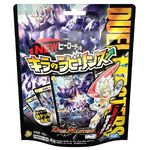 Retrieved from "https://duelmasters.fandom.com/wiki/Duel_Masters_(DMRP_Block)?oldid=385594"
Community content is available under CC-BY-SA unless otherwise noted.