The legend of 5 Enlightened creatures giving power to the Gods to arise but this ritual needs a lot of Duel Energy. Mikado Kozuki and his sister Luna Kozuki were used as a ritual by a hidden organization. Mikado and Luna are actually descendants of the chosen ones Yaesar and have the power to control the Gods. Because they are the descendants they have their own 5 servants, known as the duelist hunters who will do anything that they have been ordered to. They saved Mikado and his sister from the ritual but because the ritual wasn't completed, the enlightened cards were scattered all over Japan. Mikado now had the influence of a God's power inside him and has been gifted with the God cards.

Mikado ordered his servants to go and hunt for the Enlightened cards. One of the Enlightened cards was with Shobu who had just used it to win against Rekuta at the local park where he has always practiced. There he met Luna Kozuki who followed Shobu in order to get his card she acted friendly towards Shobu and challenged him to a duel just to confirm where he keeps Drag Moon, the Enlightened. She lost the duel but she enjoyed it a lot and made a friendship bond with Shobu. She went to Shobu's place because it was late and stayed overnight with Shobu. She tried to steal Shobu's favorite card Drag Moon which was given to him by his father Shori Kirifuda. But in the end, she could not bring herself to steal the card.

She took Shobu's Drag Moon and went with Mikado. Later Shobu was severely injured had no hope or strength to ever duel again, he felt betrayed and left everyone and his deck. Then when Mimi tried to encourage him to duel again and gave his deck back to him he threw his own deck into the river which he loved so much but Mimi brought his deck out of the river and told Shobu that he can never do that again because Shobu's deck is the bond between him and all his friends even Luna who protected him. Shobu then realized and went to Dr. Root to find out more about them. Dr. Root told them that the legend is far more than what they thought. The legends also show another Enlightened card also a God Slayer who has defeated these Gods and also according to legend there is one more hero which shows up in the very end. Dr. Root told them this whole event took place at a sacred mountain which was also a land that had a connection to the Duel Masters World.

Dr. Root took them to the mountain but they all were all started to get attacked by Mikado's servants. Shobu's friends dealt with all of them and told Shobu to keep going and find Luna. When Shobu found Luna she was dueling her own brother Mikado to stop his lust for power but Mikado refused and told her about the tragic past that they have been through even though they were the descendants they were from a poor background and they had faced such hard times every day. In the end, he defeated his own sister and took her favorite card Super Necrodragon Lunarzberg. This card was the bond between them and it was the bond between Shobu and Luna. When Shobu came Shobu saw Luna fainted Shobu got very sad and angry. Then Luna's bird Kuroro which is actually Lunar Kuroro gave Shobu the God slayer Enlightened card. With which he could fight off against Mikado.

Mikado once again started the ritual to bring the Emperor of the Gods to life and has succeeded in his attempt but the power he actually received was not only just to summon the gods at will also he himself received the power of Gods. Shobu challenged him once more and they both started an intense and epic Kaijudo duel. Shobu faced against the Emperor of the Gods, one after another and finally brought out his God slayer; Rising NEX, the Enlightened to defeat them. However, Mikado was still not defeated and managed to transform into a God. Dr. Root realized how the true power that he received wasn't to bring out God's at will but to change oneself into a God. But Shobu did not give up and with his last turn and zero shields miraculously summoned the hero of the legend Bolshack Cross NEX and defeated him. Shobu showed the true path to Mikado through this duel that what his sister wants is not his power but his love and that is all. Mikado's duel for transforming into a God for the lust of power blinded him from the miracles of love and lost to Shobu, hence he lost his transformation as well. Later Luna and Mikado made up with each other and the defeated servants also become friends with Shobu and his fellows. 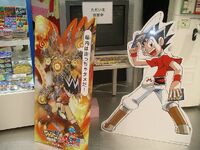 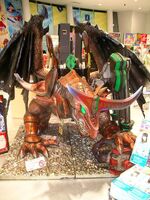 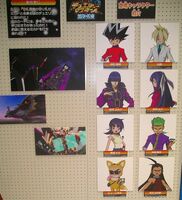 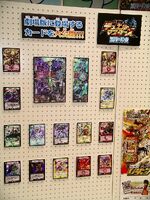 Adge, Emperor of the Gods P37/Y8
Add a photo to this gallery

Retrieved from "https://duelmasters.fandom.com/wiki/Duel_Masters:_Lunatic_God_Saga?oldid=388545"
Community content is available under CC-BY-SA unless otherwise noted.