A new assassin comes to Taiga Akaboshi who has become a non-participant in the 'Asian World Championship' finals.

Is there a crisis with friends and friends?

A new chapter that has been powered up and started! It is! 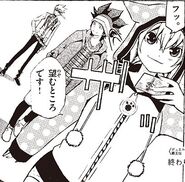 new character
Add a photo to this gallery

Retrieved from "https://duelmasters.fandom.com/wiki/Duel_Masters:_Haouden_Gachi!!_-_Volume_3?oldid=357763"
Community content is available under CC-BY-SA unless otherwise noted.