Duel Legend is the Korean version of Duel Masters.

It is produced by Sonokong, a Korean toy and game, entertainment company. Their technical license is owned by Takara and Hasbro.

There have also been many Duel Legend regional tournaments in south Korea. The prizes, the winners and tournament registration are all shown on the official website: http://duellegend.sonokong.co.kr/

Front and Back side of card.

Duel Legend has an online game which can be played on their website, by becoming a free member and later purchasing their game's booster packs and decks online for play on their game. It is not known whether the players can play other players in the Korea but it is confirmed that the players can go against other game opponents from the anime series.

It features characters such as:

All the cards released in the Duel Legend TCG are available for use on the game with the game updating for each new set. The game does not feature the Hyperspatial Zone or Psychic Creatures as they are not yet released in Korea. The game can only be downloaded by Internet Explorer.

They is also demo engine for Duel Legend in which all the basic steps and actions are taught. In the demo you are given a Fire, Nature and Water civilization Rush Deck.

The interesting thing about the demo engine is that it comes with 2 options; The first option is a normal training simulation, but the second option actually allows you to duel against Rekuta who uses the same deck. 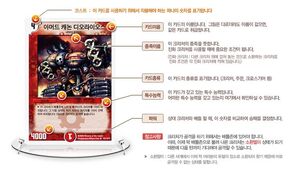 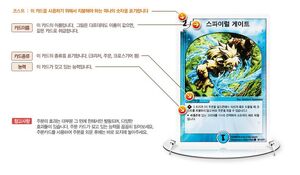 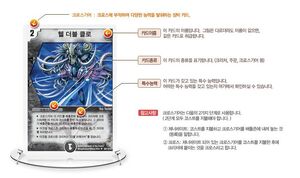 Season 1
This is the first season of the Duel Legend Anime.

It includes all episodes from the Duel Masters Charge season.

Duel Legend Cross
This is the fourth season of the Duel Legend Anime.

It includes all episodes from the Duel Masters Cross season.

It includes all episodes from the Duel Masters Cross Shock season.

Retrieved from "https://duelmasters.fandom.com/wiki/Duel_Legend?oldid=300182"
Community content is available under CC-BY-SA unless otherwise noted.