Both he and Atsuto sang several opening and ending songs for the anime season.

He is the TV host for the Duel Masters Dash TV show. He is always partnered up with Duel Hero Atsuto. 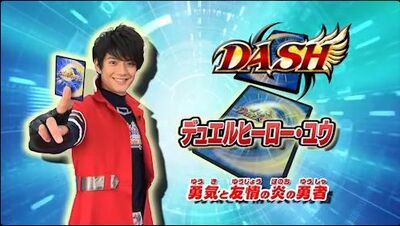 Yuu and Atsuto are the hosts and commentators for the Duel Carnival Tournament.Both of them sang a song together before they start the qualifiers.They also reveals the prize card of the tournament.

After Onsen had escaped from the Hospital, he had to duel alongside Atsuto against Rikishi and Shachihoko in order to attempt to get information out of them about the whereabouts of Onsen .However, despite their good dueling skills due to Shachihoko and Rikishi's illegal exchange of cards during the battle,they had lost and were unconscious for a while and were trapped in the room were Rikishi and Shachihoko were until Mimi saved them.Later the three traveled around trying to find Onsen and the others.

Yuu and Atsuto were Duel Masters icons and were involved in Duel Masters campaigns and tournaments.He was defeated by Lucifer during the Lucifer World Cup.Both of them are present in the New Year Countdown exhibition match.

Yuu and Atsuto are the protagonist of Duel Hero: DASH.

In this manga series, he dueled against Atsuto and defeated him.

He used a Fire and Nature civilization deck.