Dreammate is a race of creature shared between the Fire and Nature civilizations.

They are supported by Vehicle Bees.

They are the descendants of Beast Folk and resemble cute and deformed animals. Due to influence of the Fire Civilization, they are able to utilize technology unlike their ascendants.

Evolution creatures feature "Amazing Artiste" (, Dai sakka) in their name and hold pencils or brushes. This only exception to this is Kenji Panda Nelra, Tyrannical Shogun.

Creatures that evolve from Dreammates 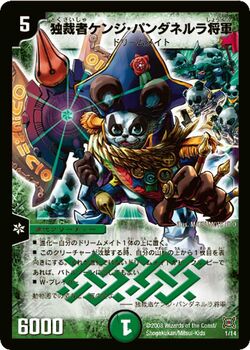 Retrieved from "https://duelmasters.fandom.com/wiki/Dreammate?oldid=404796"
Community content is available under CC-BY-SA unless otherwise noted.