Draguner is a race of creature shared between each of the 5 monocolored civilizations.

Each of the creatures with the Draguner race bring out a Dragheart from your hyperspatial zone into the battle zone.

All Draguner cards feature no borders on their Card Frame.

They each feature (Ryuha) in their card name.

Only Draguners can contain the massive power of Draghearts. Any non-draguner creature who attempts to wield a dragheart will evaporate immediately according to the flavor text of Gambalander, Dragon Edge.

Unlike other cross civilization races, the Draguners of different civilizations are rivals of each other.

Creatures that evolve from Draguners 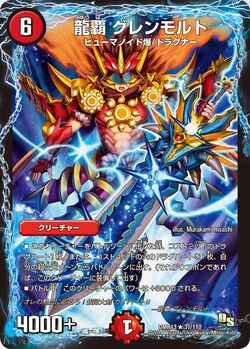