Double Cross is a Name Category of creatures who first featured alongside the Aini category in DM-36 Psychic Shock.

The 2 series of creatures featured throughout the Psychic Shock of DM-36 to DM-39.

In the CoroCoro comics, they have been described as the heirs to "NEX" creatures.

In card artwork, they also feature many chains reminiscent of Überdragon Bajula or Galzark, Divine Destruction Dragon Knight. No effects on Double Cross creatures have been similar. 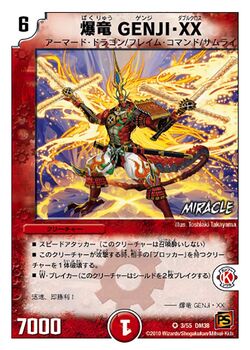