Dispector is a race shared between each of the five civilizations.

Creatures within this race are based on a combination of formerly-released creatures throughout the games' previous 20-year history up to 2021.

Unlike the RexStars released in the same The Rise of Kings block, Dispectors are creatures created from forcibly combining two creatures with each other, usually creatures that oppose in beliefs or even two completely unrelated existences. They disrespect the proud existences that form them, and must be defeated to rescue the creatures infused with each other. They attacked the Duel Masters world after the defeat of End Jaouga, Oniga Emperor Devil and unleash an unprecedented catastrophe, forcing the resident creatures to form RexStars, creatures that had legitimately entered a pact with former creatures, to oppose them.

In the anime series of Duel Masters King!, they are used by Jendle, the main antagonist and his group of "Gattles".

They have a unique keyword, EX Life.

They have a Support Race known as Distas, with this race featuring the Dispector-specific Cost Reduction keyword; Sasagale.

Many are part of a 3-civilization multicolored combination.

Currently the race only occurs on creatures that have a cost of 6 or more.

Depending on the 3 civilization combination they belong to, they each feature different Kanji in their name, relating to how the creatures are combined with each other.

Like the majority of other creatures in the The Rise of Kings block, they are named after previously released creatures.

Dispector are supported by the Sasagale keyword exclusively found on creatures that have the Distas race. 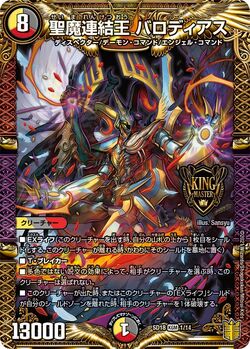