Death Puppet is a race of creature in the Darkness Civilization.

They feature (Ningyou) in their card name, meaning "doll" (or "puppet").

Death Puppets are artificial creatures manipulated by Dark Lords as disposable weapons. Tyrant Black Monarch created them in order to compensate his army's defeat by the hands of the Nature Civilization.

They have disagreeable natures, and revel in the opportunity to create chaos and mayhem. Originally dolls or toy figures, their appearances vary greatly from one creature to another. All have strings like a marionette, but no operator is required.

Death Puppets are not very powerful. They collapse immediately when attacked, but rise once the enemy has left. Their haphazard appearance is the result of numerous self-repairs, done with unskilled needlework.

In the Phoenix Saga, they were one of the few surviving "Old Races".

In Episode 2, They were one of the races who resisted the conquest of the Unknowns, along with Humans, Red Command Dragons, Dreammates, Liquid People, Beast Folk and Initiates.

In Episode 3 They were one of the weapons used by Outrages, most notably Bruce, Dead or Alive. When British, Hell Blues absorbed his power, he became Ultra Knight Punk, Shentury and is able of using Death Puppets as weapons.

Creatures that evolve from Death Puppets 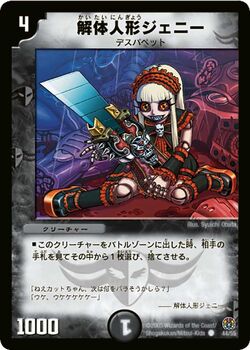 Retrieved from "https://duelmasters.fandom.com/wiki/Death_Puppet?oldid=425176"
Community content is available under CC-BY-SA unless otherwise noted.