View source
watch 02:58
No Man's Sky Update - The Loop
Do you like this video?
Play Sound

Dark Knightmare is a race of Knightmare creature in the Darkness Civilization.

Non-evolution creatures have (Ankoku Gai, Dark Armor) as a suffix.

Evolution creatures have (Mugen Kishi, Dream Knight) as a suffix.

Some have names that are related with Star Wars (such as Lucasley, Vader or Darth Sith). 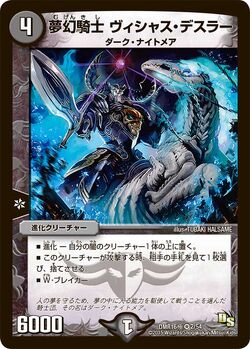