This set is created in order to allow new players access tournament worthy cards easier, and various kind of decks can be created by combining these cards.

Some Basic Cards including Draw Sources such as Energy Stream and Aquan Jr.'s Delivery or Mana Acceleration such as Jasmine, Mist Faerie or Faerie Life were not included. Instead, cards suitable for beatdown strategies such as the Start Dash cycle were chosen.

Similar to the CoroCoro Dogiragon 40 Card Deck, the cards in this set have Flavor Text that teaches the player how to play the game, as well as other tips (such as recommending the player to have at least 8 Shield Triggers in their deck). However, some cards have recycled flavor text from previous printings.

On the left side of the Mana Number on some cards, the watermark for the Revolution or Invader races is included. This is to illustrate which deck the card should belong in. However, some cards such as Falcon Bomber, Rocket Dash can be used in either sides deck.

Contents of the tutorial comic

The story starts with Katta and Lucifer teaching the basics of the game, then after Katta finishes teaching about Shield Triggers, Basara, Hakase, and Rambo arrives and beat Katta up in order to have him teach new tactics. Basara then duels Katta and sends out a few creatures to break his shields, only to have Katta send out Jigon, Revolution Dragon and destroy his creatures using it's Revolution ability. Then Basara sends out SA-Double, Super Lightning Sonic to give all of his creatures Speed Attacker and defeats Katta. After the revolution and invasion tutorials, Katta, Lucifer, Kojiro, Basara, Rambo and Hakase teach the player how to use the foil cards of this set, After that, each character claims their trump cards are the best and fights each other. Finally the fight stops and Katta says the parting word of the comic.

(Cards with a ◎ icon have a Full Frame Art) 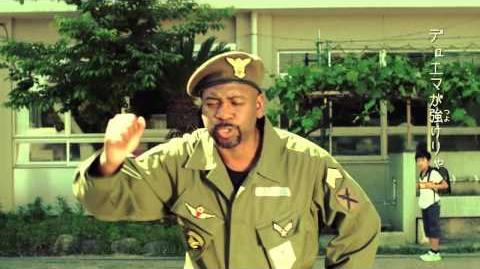