Triple Shifter! Dragsolution Allstars is the 18th DMX set in the OCG.

The pack centers around the Fire civilization's Humans and Dragons.

Its center is Batorai Edge, Blazing Sword. Glenmalt "Explosion", Dragon Edge can bring out its second form, Batorai Keep, Blazing Castle directly. Since it is not hard to spam Dragons, Batorai Bushin, Blazing Deluxe can easily be Dragsolutioned, thus making it a versatile card. Bolshack Superhero has been reprinted to offer more firepower while Moel, Love Sniper was reprinted in order to counter the meta of Glenmalt, Dragon Edge. Since it is a Victory pack, its chances of appearing are the lowest.

The Light civilization's main strategy involves shields and defense, so Javeleon, Beast Lance's shield return effect is unusual. Everrose, Dragon Edge is the cheapest way to bring out Javeleon. Emeralda, Pitch Dragon Elemental can help one toy with their shields and set shield triggers such as DNA Spark. It is the first time Glory Snow had been reprinted and its mana acceleration effect is welcomed in a civilization lacking in this category.

Hellsekai, Great Massacre features the main focus of the Darkness civilization which is removal. Hellfuezu, Purgatory Blade can be Dragsolutioned fairly easily, especially through a combo of Death Gate, Gate of Hell and Uroborof, Dragon Edge. Basoabisu, Abyss Demon Dragon is reminiscent of Olgaiza, Dark Demon of the Evil Fortress, but having an even stronger effect. Even though Varz Romanov, Dark Lord of Demons had been reprinted as a WINNER Card, it appears in this pack too in order to help beginners strengthen their sources. Time Tripper, Shadow of Stagnation's reprint was also welcomed as it is useful for a Dragon Saga environment.

Verokiboaros, Ga Ga Ga focuses on bringing out Nature creatures from the mana zone, but with the help of Imen=Bugo, Dragon Edge creatures from other civilizations can be brought out from the mana zone as well. Ochappi, Pure Hearted Faerie and Benijishi Spider are flexible ways of mana acceleration while Rumbling Terahorn's reprint is a means to strengthen decks with Glenmalt, Dragon Edge.

Helen's gathering! All for the black sun! pack

The Light civilization's new focus appears to be bringing out small creatures from the hand into the battle zone.

Soleil Noir, Solar Eclipse Dragon Elemental seems built around this concept and its effect has synergy with Mist Rias, Sonic Guardian. As such, Sasupega, Relief Wings was made as an alternative Mist Rias specifically for this strategy.

Kigunashion, Pure White Wings appears before Dragon Saga and is of utmost importance for Dragon Saga light civilization decks and was finally reprinted here. Diamond Sword was also reprinted to enforce the beatdown element of such decks while Ariace, Dragon Edge is printed for the third time since DMR-13 and DMX-17.

Daisushidora, Nitrous Sky Ship features a tricky part of the Water civilization, as it casts spells from the opponent's graveyard.

Out of all the cards from this pack, only Siren Concerto is of interest, as compared to the others it has never been reprinted before since DM-10.

The pack is centered around Liquid People and draw. Since the Dragheart is low costing, these cards can be adapted to DMD-17. Thunderbolt, Aqua Militant is reminiscent of Aqua Genius, Cyber Admiral's madness. Crystal Spinslicer has also been reprinted to enforce the beatdown element. Aqua Super Emeral's reprint is also welcome due to its synergy with Ragnarok, the Clock.

Utsusemihenge, Blame Demon Dragon has great synergy with the graveyard supply of the Darkness civilization. Besides of bringing out cheap Draguners and Draghearts, this pack focuses on filling one's graveyard to strengthen Utsusemihenge, Blame Demon Dragon. Due to Migawari, Nightmare Manji's flexibility, it would be recommended mixing this pack with the above-mentioned Kojiro pack.

This pack focuses on Fire's civilizations smaller Draghearts and Humans.

Out of all other cards, only Linkwood, Explosive Yamabushi is of some importance due to its flexibility in a Human deck.

Juran Kuruga, Growthkind is the trump card of this Nature civilization focused pack due to its mana acceleration capabilities.

Sasoris, Dragon Edge can put Le=Piraju, Birth Mystery directly into the battle zone, easing its Dragsolution. Due to its flexibility, this pack can be mixed with the aforementioned Gyou pack. Dokugeta, Toxic Acid Trap Jaw is also of importance due to its Dragheart Fortress and Cross Gear removal as well as its madness effects.

While Codename Thirteen is the cause of the Dragon Saga world in the background story, its existence has never been mentioned on its card in this expansion. It is just one of the finishers that were intended to be sent via this pack. 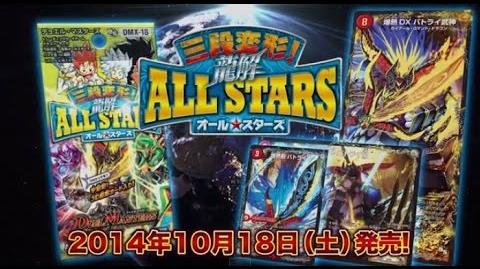