The Great Royal Strategies: Fantasista 12 is the 16th DMX set in the OCG.

This set contains 12 different packs based on different strategies of anime characters with 7 cards each.

As the block focuses on a monocolored strategy, only 1 card in this reprint set is multicolored.

Each of the creatures in the "Start Dash" cycle from DMR-09 Rage vs God are included.

Around 1 out of every 3 boxes will contain a Katta's Victory! Great Dragon World pack or a Lucifer's Splendid Victory! Dragon Lord of Spirits pack, which contains a Victory Rare.

Unlike DMX-14 Strongest Strategy: Perfect 12, there is no Secret Pack.

Baradios, Lord of Dragon Spirits and Dorago the Great, Dragon World are featured on the set's packaging artwork.

Katta's pack focuses on Red Command Dragon and Armored Dragon races. Dorago the Great, Dragon World is the center of this pack, but since its cost is high, the card should either be put into the battle zone for no cost or its cost can be reduced via Cheering Pippi.

Jackpot Batoriser's effect can be abused in order to bring out Dorago the Great into the battle zone.

Since Dragons are the main center of this deck, Infinity Dragon is a must. Bolmeteus Steel Dragon is also reprinted once again. Since DMD-15 also focuses on Dragons, the cards here can be adapted to it. Cocco Lupia is also recommended due to its strong cost reducing.

Out of these, Baradios, Lord of Dragon Spirits is the strongest due to its freeze effects and its easy evolution bait.

Codeking Number Nine has been reprinted, making it easier to get for players. While Number Nine features spell lockdown, Truename Baulion was also reprinted for its spell recovery.

Since True Heaven's had left the DASH Golden List, it was reprinted along with DNA Spark to ensure more lockdown. This pack can be adapted to DMD-16, but one should be careful not to add too many high costing cards to it.

This pack focuses on Zombie Dragons, as well as filling one's graveyard and battle zone.

The only new card is the darkness version of Ryusei Kaiser, the Eternal, Ryusei In The Dark.

Transmogrify can no longer be used as it has been put into the premium hall of fame.

The Nature civilization got a new Dragon race, Jurassic Command Dragon. Kachua, Keeper of the Icegate and Triprex, Growth King are for cost trampling Dragons while Buon, Saver Style is to help bring out Terradragon Drapi quicker in a Designer's Combo. Subsequently, one can add Malulu, Fairy of the Snowy Valley along with Buon, Saver Style.

As the name suggests, Bolshack NEX is the center of this pack.

Cocco Lupia and Bolshack NEX is a strong combo that can be adapted to DMD-15 Beginning Dragon Deck: Battle Passion Dragon. Resembling Valkerios Dragon, Valkerios G Kaiser has appeared for the reason that the original supported only Armored Dragons. Codename Valkyrie Ragon can work with Valkerios G Kaiser to spam more Dragons to the field.

Since this pack features small costing blockers, it can be adapted to DMD-16 Beginning Dragon Deck: Heavenly Justice Dragon. Except for Bonsoir, Dragon Elemental Admiral, all creatures cost 3 or less and thus have good compatibility with Valhalla Knight, Domination Dragon Elemental and Almil, Rebirth Elemental.

Since many of these creatures cannot attack players, Diamond Sword and Diamond Aven, Awakening Elemental are to be considered for adding. Bonsoir, Dragon Elemental Admiral is also a way to make up for Heaven's Gate decks' weakness to discard.

As such, Lp Ekspelion has synergy with spells such as Energy Stream and Eureka Charger for a good progression. Adding spells from the Benchan pack is also a possibility, but while spells are not really required for DMD-17, Streaming Shaper can be taken into consideration.

While Dragon Saga is focusing on monocolored strategies, this pack breaks the rule by featuring a multicolored card Super Move! Absolute Despair!!, fact which attracted the criticism of fans.

The strategy of this pack is to give all civilizations to your mana through the effects of Courtney, Summer Breeze Faerie and Nyasu, Courtney Style, then to boost your mana with Faerie Miracle and Boaroje, Miracle Style. Super Move! Absolute Despair!! can be casted afterwards, abusing all of its effects in this designer combo. Besides this, the deck can also use various Mana Arms for all civilizations.

As the title suggests, the pack focuses on Vanilla creatures. As such, Vanilla beatdown has been enforced once again. Since Aqua Teacher has been reprinted in DMD-17, the deck's resources are easier to fill. It is the first time Dunas, Spirit Knight has been reprinted, mostly likely due to its Vanilla status.

Ragnarok, the Clock appears due to its powerful turn stopping abilities. Its flavor also explains the presence of Outrages in the Dragon Saga timeline.

Despite it being reprinted many times with its original artwork, Heaven's Gate once more receives a new art. Besides this, Necrodragon Odol Needle's new reprint was also welcomed in a saga based on Dragons. 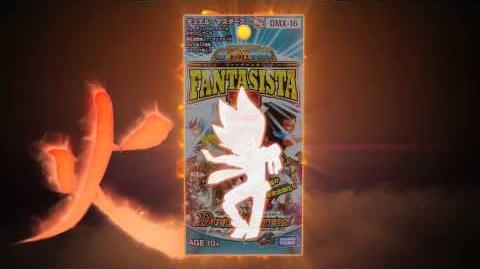