Katta Kirifuda's set is focused on the Revolutionary race. Assal Dracchi is the first time a Fire Bird received forced battle removal while Flaming Meracchi is used to easy the summoning of Dracken Assault, Bursting Revolution with the purpose of activating its Revolution 2 effect should it be facing a beatdown deck, and even if it does not, it still provides a removal-resistant finisher in battle. One could add Dogiragon, Flaming Revolution and Dracken, Revolution Dragon as additional finishers, but if the player wants to use Dracken, he should remove most non-dragon creatures in this deck for its maximum efficiency. Bolshack Dogiragon and Iron Fist of Revolution can also be added for extra revolution 0 trigger defense. If the player wants a Fire Bird strategy, Captain Dracken, Captain Mister Amecchi and Strike Amecchi can be added.

The core set features the reprint of Batocross Battle, Passion Dragon, much to the pleasure of competitive players. Ifrit Hand is a weaker version of Terror Pit for mono Fire decks, which in a meta that is shifting towards creature shield trigger defense seems out of place. As such, it is advisable to just replace it altogether with either a good creature shield trigger like Sturm, Scrapper or with stronger spells such as Tenshukaku, Dragon King Keep and Iron Fist of Revolution. Kodamanma, Gil Gil Puppet and Galaga, White Ogre are for shield reduction and hand advantage, which benefit both Revolutionary and Invader strategies. Magnum, Shortshot can also benefit both strategies, as it can counter shield trigger creatures and ninja strikes for invaders performing quick assaults, or revolutionaries assaulting the opponent with heavyweight creatures.

This can be used as a backbone for the Redzone decktype.

The trump card Redzone Z, Passionate Invasion's shield burn effect serves as a counter to creatures such as Aqua Super Emeral and Emeralda, Pitch Dragon Elemental. With the appearance of The Zet, Lightning Sonic, Fire Command Invasion has gotten even easier, and as such it is advisable adapting the original Redzone to this deck as well. By combining both Redzones, one can both burn a shield and destroy the opponent's strongest creature. To make the deck stronger, it is advisable mixing it with DMD-21 (As there are no Topgear, Start Dash or Deadly Fighter Braid Claws in this deck) and adding in a few copies of Turbo 3, Supersonic as well. Redzone X, Forbidden Lightning Sonic can be added even though if the player does not use Darkness, and serves as a great form of removal as well as a powerful finisher that can break all the opponent's shields and do a direct attack at once. All copies of Jackal Shot, Supersonic should be removed from the deck as it is a downgrade of Redzone, and all copies of Gatling, Sonic and Nitro Flag, Sonic should be removed as well as they do not fit the Redzone command strategies of the deck.

Dokindam X, The Legendary Forbidden is a pretty viable option to this deck as when used correctly, it can do a direct attack on the opponent with no interference at all. It also allows use of Liberation of the End in this deck, which is recommended to be replaced with some copies of The End of X for stronger removal and resistance to VAN Beethoven, Zenith of "Shura". Ironically, Bolshack Dogiragon can be added for defense too. 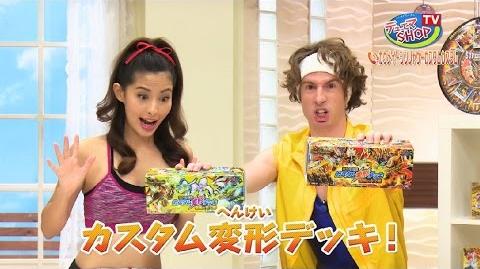 Retrieved from "https://duelmasters.fandom.com/wiki/DMD-27_Custom_Transformation_Deck_Revolution_vs._Invasion:_Explosive_Passion_Fire_Civilization?oldid=336800"
Community content is available under CC-BY-SA unless otherwise noted.