This deck is based on Katta Kirifuda's new Super Victory Deck from the Duel Masters Versus anime series.

The card assortment is also stronger than the Previous Super Victory Decks, with cards that were previously considered extremely difficult to obtain such as Onimaru "Head", Victory Rush, All three parts of the Gaial Ore Dragon, the Vainglory psychic link and Forever Princess, Eternal Ruler were reprinted in this set, making them easier to obtain for newcomers.

However, due to the high popularity of the set and Takara Tomy's cancellation of its re-manufacture, it sells out extremely quickly and the remaining ones were sold for extremely high prices.

It is the first pre-built deck from Dragon Saga that contains multicolored cards and Dragheart Fortresses. Similar to previous Super Victory Decks, all cards are silver bordered. It is also the first DMD to contain four Victory Rare

While Onimaru "Head", Victory Rush got a new artwork, it is not a Dramatic Card, unlike Ryusei Kaiser, the Eternal and Hyperspatial Bolshack Hole.

Use Johnny Walker, Exploding Mask and Gantora Maxivus to increase your mana, as well as Royal Islay, Explosive Passion to replenish your hand while waiting to get out the finishers Onimaru "Head", Victory Rush and Glenmalt "Head", Dimension Dragon Edge.

The deck could be considered pseudo-mono Fire because of the multicolored Nature cards, in a way continuing the theme of DMD-18. As such, Child Festival of Faerie Fire can easily be adapted in the deck.

While mono-colored Nature mana acceleration would be preferred, it would weaken the Mana Arms strategies of the deck, so players would have to choose between adding mono-Nature cards and taking out the Mana Arms cards, or keeping the deck just with mono-Fire and multicolored cards.

Since Glenmalt "Head", Dimension Dragon Edge is a versatile card, both psychic creatures and draghearts can be easily adapted to the hyperspatial zone.

These edits are ways in which the deck can be improved. 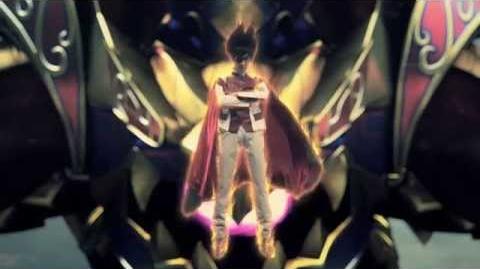 Retrieved from "https://duelmasters.fandom.com/wiki/DMD-20_Super_Victory_Deck:_Victorious_Rising_Dragon_Sword_Gaiohburn?oldid=403766"
Community content is available under CC-BY-SA unless otherwise noted.