Arcadias Knights is the 46th DMC pack in the OCG.

The cover on the deck features White and Zakira on the cover. Each card in DMC-46 has yellow card borders instead of the usual black. The deck also comes with a tutorial on how to play the deck.

This set was released alongside DMC-45 Battle of Yamato Soul as part of the Super Deck Cross series.

Each card in this set was illustrated by Hippo. 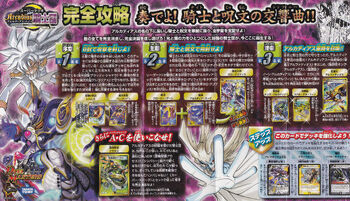 Tutorial on how to play the deck.
Add a photo to this gallery