This deck focuses on the Drama deck type based on the "Balga" family of creatures (which started with Magmadragon Balga Geyser).

This deck is not as bad as its counterpart, although massive work needs to be put on it. For starters, one of the first cards to be removed is surprisingly, the Balga Do Raiba, Matchless Dragon Phantoms. They should be replaced with Balga Raizou, the Super-Heavenly Nova which is a considerably stronger card. The other cards to be put in are Dragshoot Charger, Gaial, Victory Legend and extra copies of Digorpion, Ground Digging Snakekind or Teranesk, Hard Battling Ancient Dragon. Several more Dragon Fantasy Trap Sparks or even Uisu, Dragon Armored's Investigation / Holy Spark can be added as well, and Koltiolu, Scale Dragon Elemental and Mega Blade Dragon should be removed entirely.

Overall, the deck should not have more than 8 non-dragon cards. Mega Magma Dragon should be added to the deck in order to deal with troublesome cost trampling meta and mass weenie spams and Codeking Wilhelm and Codeking Mozart are wise additions despite this deck not using Darkness as a concept. Glenmalt "Blade", King Dragon Edge can also be used but it costs a lot more due to its reliance on a new Hyperspatial Zone. If extra finishers are added, Codeking Number Nine, Dorago the Great, Dragon World and VAN Beethoven, Zenith of "Shura" are excellent ways to devastate the opponent. 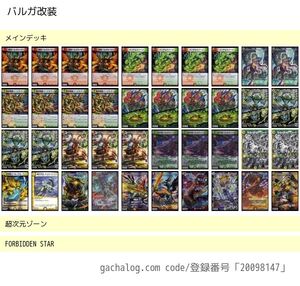 An example of how to reinforce this deck.