Cyber Virus is a race of Cyber creature in the Water Civilization.

Evolution Creatures in the OCG have "Astral" in their names and resemble massive weather-controlling storms.

Cyber Viruses are luminous creatures artificially created by Cyber Lords. They can be as small as plankton or as big as an inchworm. Cyber viruses can be found at work in reconnaissance satellites, concealed in microphones, implanted in antennas or computers. They are equally capable of disrupting the thought processes of a living creature as they are of causing machines to malfunction. An advanced Cyber Virus can even infiltrate computers and manipulate or rewrite programs.

Cyber Viruses are extremely physically weak creatures, with the strongest being Astral Super Reef, a creature with 7000 power and double breaker. However, they are very cheap and fast and are capable of swarming for great offense as they contain many unblockable creatures. They are also very efficient in replenishing the hand, with their cheapest draw source Astral Reef, being one of the strongest cards in the game due to its speed and hefty draw for a cheap price, and was thus restricted. Many attempts to remodel this creature have failed, until 14 years later, Astral Super Reef appeared and allowed other cyber viruses to use it's 3 card draw, and increased the offensive powers that cyber viruses are often lacking at.

Other Cyber Virus races include;

Creatures that evolve from Cyber Viruses 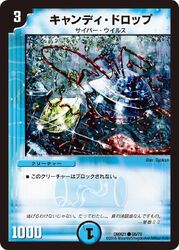 An example of a Cyber Virus creature. 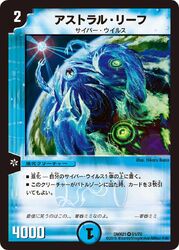 An example of a Cyber Virus evolution creature.
Add a photo to this gallery
Cyber

Retrieved from "https://duelmasters.fandom.com/wiki/Cyber_Virus?oldid=419458"
Community content is available under CC-BY-SA unless otherwise noted.