Cyber Lords is a race of Cyber creature in the Water Civilization.

The names of Cyber Lords are usually comprised of 1 word, while their Evolution Creatures have "Emperor" before their names.

Cyber Lord's are the dominant race of the Water world. They are able to communicate telepathically with other Cyber Lords and can control other races with their brain waves. Although they are highly advanced intellectually and technologically, they resemble infants or fetuses floating in a cylinder of fluid. Each Cyber Lord has a large chip installed in their head, connected by numerous glittering cables to other parts of their body.

The Cyber Lords are responsible for the creations of the Cyber Moons, the Cyber Viruses, and the Gel Fish.

Very aware of their physical weakness, Cyber Lords avoid participating in actual fights whenever possible. If necessary, they will fight using telekinesis, but prefer not to because it drains them of power. Instead, they take pride in developing skills to avoid war, including retreat and negotiation.

Creatures that evolve from Cyber Lords 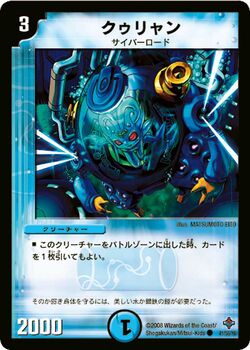 Retrieved from "https://duelmasters.fandom.com/wiki/Cyber_Lord?oldid=419456"
Community content is available under CC-BY-SA unless otherwise noted.