(For the clan from the Duel Masters TV-Series see Chimeras)

Chimera is a race of creature in the Darkness Civilization.

Evolution Creatures also have an ominous humanoid female face as a part of their body.

Chimeras are one by-product of the Dark Lord's bionic experiments. They are deformed creatures, a complex amalgam of many beings, with wildlife as the prototype.

Chimeras protect themselves with fangs, poison or protruding bones. They have no eyes and are unable to reproduce. Any special abilities vary naturally from creature to creature, depending on their ancestry.

Creatures that evolve from Chimeras 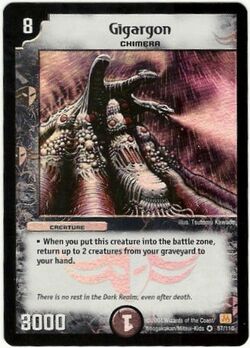