Card Frames detail the different aspects of a card in the Trading Card Game, with different treatments for the various Card Types

The following is an illustration detailing the various characteristics of a card. 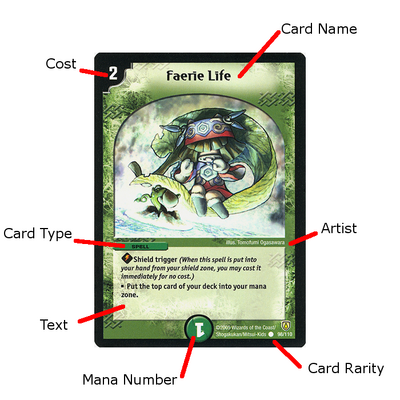 The civilization of the cards: Light, Water, Darkness, Fire, or Nature is incorporated into the frame artwork, and rarity levels are shown by symbols on the bottom right of the card.

Faerie Life in the post-DMRP-01 card frame.
Add a photo to this gallery

A card can contain the following features:

(The following card rarities are featured in the English and Japanese game.)

(The following card rarities are exclusive to the Japanese game.)

Retrieved from "https://duelmasters.fandom.com/wiki/Card_Frame?oldid=367774"
Community content is available under CC-BY-SA unless otherwise noted.