Bolshack is a Name Category of Armored Dragon creatures in the Fire Civilization.

Due to Bolshack Dragon being one of the most well-known cards of the Duel Masters game, the Bolshack Dragon has had many cards based on it throughout the history of the game.

While being a heroic character, its First incarnation is not used much in the metagame due to the fact that it's Quasi-Vanilla and had no abilities other than a Power Attacker ability that increased by 1000 per creature in its owner's graveyard and Double Breaker.

It first gained an improved version in the form of Bolshack Yamato Dragon in DM-26 Dragonic Wars where it gained Speed Attacker and an effect to improve Bolmeteus Musha Dragon.

During DM-32 Evolution Saga it got a "NEX" variant in the form of Bolshack NEX. This version of the card allows it to search out a Lupia creature from your deck into the battle zone, as well a power attacker ability based on the number of Fire Birds in your graveyard, reflecting the synergy between Fire Bird and the Dragon races.

Bolshack Ulpheus, Holy Dragon is an Angel Command / Armored Dragon / Hunter evolution creature that can be played on Commands or Dragon creatures, symbolizing the combination of its names Bolshack and Ulpheus, Dragonic Elemental. It was based on the Bolmeteus and Ulpheus card, Bolpheus Heaven, Super Holy Dragon, and allows you to cast Light or Fire civilization spells for no cost.

With the release of Psychic Creatures to the game, one of the first creatures to be featured with the Bolshack Dragon, the Temporal Blaze. While it had a cost of 7, it was a copy of the original Bolshack Dragon card. It was able to awaken and flip to a card with additional power, triple breaker, as well as an effect to destroy creatures and untap after attacking once a turn.

The Hyperspatial Bolshack Hole spell featured this psychic creature on its artwork, as well as being able to bring it out for a cost of 5.

DMR-02 Dark Side consisted of a Hunter variant named Bolshack Superhero with an effect that destroyed creatures with a power of 3000 or less, as well as psychic creatures with 5000 or less.

Überdragon King Bolshack is an evolution creature version of Bolshack Dragon that is capable of using a Gravity Zero ability that activates if the player has a creature with Bolshack in its name, enabling the Bolshack category to use a high-speed offense tactic like Invasion. Überdragon Zaschack also seems to be an evolution of Bolshack, but it's an extremely weak card so it is left into the dust.

Later on, a completely different dragon who uses Bolshack's name, Bolshack Dogiragon appeared which is supported by the Bolshack category. However, its purpose is to a defensive card used to counter rushes. As using its Revolution 0 Trigger ability it can cost trample all sorts of Fire finishers before it evolves on top of them, it can equip Draghearts, destroy swarms and even destroy Dokindam X, The Legendary Forbidden by itself. While it is intended to be a Dokindam X counter, it ironically also works well with it because it can remove seals from Forbidden ~The Sealed X~.

Bolshack Dragon has existed since ancient times, but it has not appeared as an important character early on in the story. However, it is seen to be extremely violent as a village who offended it became a ruin. It also seems to be one of the core Fire Civilization forces in the civilization wars.

However, in Divine Evolution Saga, it began to play an important role under the form of Bolshack NEX. Bolshack NEX is a heroic entity who helped fight for the world against the Origin Gods, and was followed by Lupia fire birds. After many of the resistances were defeated, it and the Lupias entered rigorous training and got the power of ultimate evolution turning it into Rising NEX, the Enlightened. But while it defeated the Emperor of the Gods, the new ADAM, God of Worldly Creation and EVE, God of Spiritual Creation easily defeats Rising NEX. However, it again rose as Bolshack Cross NEX and defeats them. And finally, the NEX has to form a temporary link with the Romanovs in order to defeat the final Origin Gods and became Romanov Kaiser NEX, the Super Enlightened which defeated the Origin Gods after a final battle.

After the events of Episode 3, The Bolshack clan, who was led by Überdragon King Bolshack, were one of the returning inhabitants of the old world.

In Revolution, a completely different Dragon using Bolshack's name, Bolshack Dogiragon, who has entered rigorous training to prepare for the dangers of Rando, appeared to assist Dogiragon, Flaming Revolution in defeating Dokindam X, The Legendary Forbidden by unsealing it. However, it was no match when Dokindam X begins his true action.

Bolshack Dragon was used as the "trump card" of Shobu Kirifuda in the Duel Masters anime, passed down to him by his father Shori Kirifuda. Throughout the series, Shobu continued to add various other Bolshack cards to his decks.

After the original, he later used Bolshack Yamato Dragon in the Duel Masters Zero series and later to Bolshack NEX and Bolshack Cross NEX during Duel Masters Cross series.

After meeting with his father in Duel Masters Cross Shock, the Psychic Creature, Bolshack Dragon, the Temporal Blaze / Bolshack Möbius, Victory Awakened were added to his deck.

In the Duel Masters Versus Revolution series, Shobu has a Revolutionary variant of Bolshack Dragon, Bolshack Dogiragon as a key card to fight the Invader race. He found the card during his travels to learn more about the legendary dragons and gave it to his younger brother Katta Kirifuda as a good luck charm and a measure to protect him in the upcoming battle of the Revolutionary and Invader. Shobu himself also has a stronger evolutionary variant of Bolshack Dragon, Überdragon King Bolshack in which he perfectly executed in summoning it in a short number of turns.

Katta's son Joe Kirifuda discovers an ancient scroll within his house basement. The scroll shows a projection of Bolshack Dragon, which is one of the 12 legendary cards that he and his friends have to find. The scroll also display Momoking's Bolshack variant, Bolshack Momoking NEX.

Cards that support the Bolshack category

Cards supported by the Bolshack category

Creatures that evolve from the Bolshack category 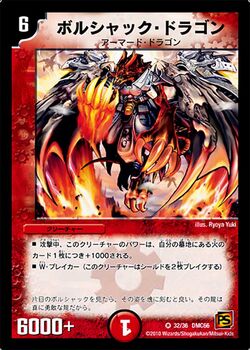