Bolberg is a Name Category of Armored Dragon creatures in the Fire Civilization.

Each creature in this category has an effect relating to the Cross Gear card type.

While originally released in DM-14 Generate Gear, the next addition to the category was in DM-28 Battle Galaxy when Samurai creatures were featured with the reappearance of Cross Gear.

They only received support to the category with the release of DMX-21 Masters Chronicle Pack: Comic of Heroes.

Cards that Support the Bolberg category 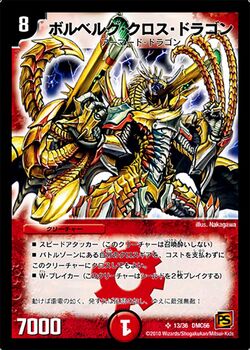 Retrieved from "https://duelmasters.fandom.com/wiki/Bolberg?oldid=354723"
Community content is available under CC-BY-SA unless otherwise noted.