Big Muscle is a race of creature in the Fire Civilization.

Big Muscles with a single race feature their full name in Katakana.

Evolution creatures use (Chōkon, Super Soul) in their names.

Creatures that have multiple races use (Sanmyaku, Mountain).

They seem to resemble golems made up of magma and stone, somewhat similar to a mix of Rock Beasts and Giants.

In the Phoenix Saga they became extinct just like most other races, but returned as a Tyranno Drake fusion in DM-24 (Magmahammer, Battle Dragonic Mountains), then disappeared, but suddenly returned as Magma Chopster in DM-30, and also returned in DM-38 as a fusion with Cyber Moon (Doskoi Firststar). The race hasn't been seen since.

Creatures that evolve from Big Muscles 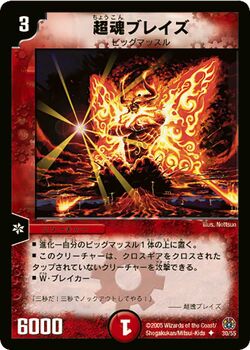 Retrieved from "https://duelmasters.fandom.com/wiki/Big_Muscle?oldid=351679"
Community content is available under CC-BY-SA unless otherwise noted.