Berserker is a race of creature in the Light Civilization.

In the TCG, Berserker creatures have "Enforcer" in their names.

In the OCG, Berserker creatures have or (Dendō-shi) in their names, meaning "Preacher" or "Evangelist".

After disappearing from the game in DM-11, they later featured in DM-31 Greatest Champion after 4 and a half years.

While not a commonly used race, it did feature on the psychic creature; Gaga Packun, Io Enforcer who is often used for its effect to increase the cost of opponents' spells.

Other Berserker races include;

Berserkers are a mass-produced soldier race comprised of alloy pieces, connected by an energy force field. They vary in size from tanks to battleships. Designed to serve as an invasion force, Berserkers attack indiscriminately, using their light sabers to irradiate any creatures showing signs of life. They are deployed one at a time against the enemy's main force, attacking until either the enemy is reduced to ruins or the Berserker itself is destroyed. 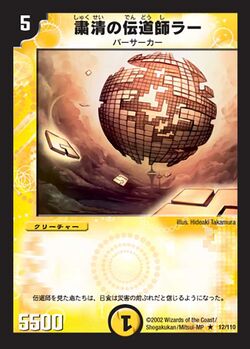