Benny Haha also known as Gyujiroh Japan, is one of the most prevalent and major antagonists in the history of Duel Masters, both in the Anime and Manga series.

While in the first season he was mostly comical, he plays a much more dangerous and antagonistic support role for Yumama and before Zakira.

10 years later in Versus Revolution he was the main antagonist in the anime version (in the Manga series, this was Basara) and his reckless and irresponsible ploys against Shobu and Katta resulted in the release of Dokindam X's spirit and the inhumanity of Basara, one of his former subordinates which was possessed by the spirit, obtaining its dark powers, which leads to the appearance of the Rare Killers that could easily cause the end of the world.

In the first season of the anime (manga), he was the third of the four Temple Guardians, but unlike the other three, he has no respect to Hakuoh and seeks to destroy him. in the English dub of the anime, he is Mimi's "twin brother" (In the original Japanese version, this isn't shown). Since then, he proceeds to run different schemes to undermine Shobu and his friends, as well as a generation later, Shobu's brother. Benny Haha is thoroughly sexist ever since Yumama betrayed him, which influenced his choices for Duel Masters Land's executives.

He is an extremely despicable, vindictive and callous person who uses whatever way, including unfair and dirty means to win, such as slipping Shield Triggers into his shields and taking people hostage, then use various means to weaken or kill them once they duel him or his cohorts. He is extremely intelligent and has intelligence over regular humans, enabling him to build numerous robots and schemes in an instant. He is also extremely weak physically that even Shobu in Duel Masters Versus is capable of knocking him out with a swipe to the head. As a result, he usually uses robots to do his job. His influence even extends to Katta Kirifuda's period after years of seeming retreat, making him one of the most prevalent antagonists in Duel Masters history, and may be on par, or even more prevalent than Zakira, where his behavior and insanity have gotten worse, even going as far as wiping out all duelists to take revenge on the Kirifuda Family. In his choice for new executives in Duel Masters Land's renewal, he seems to trust monsters such as Aliens and Zombies over regular humans, further proving this as a fact.

He was also extremely reckless and irresponsible throughout VSR as he caused his subordinate Basara to be completely taken over by Dokindam X, The Legendary Forbidden and thinks that he can solve all problems just by removing Dokindam X in a duel and/or taking away the card from Basara, unaware that he is actually creating a doomsday scenario.

However, in VSR while he is often worse than he was in Shobu's era (Considering that he betrayed Basara and caused his humanity to be surrendered to Dokindam X and thus directly causing the end of the world), he does care about his monster comrades such as shedding tears when Zon-san is spirited to heaven.

Most duelists found his schemes unforgivable and his behavior deviant and insane, most notably Shobu and Katta as they were his constant targets and both foiled his plans countless times. Even new generation duelists like Lucifer got extremely mad at him for attempting to kill Katta for the sake of revenge.

He is often seen piloting a robot. In his Temple duel against Shobu, he unfairly used cameras installed in various statues to look at Shobu's hand as well as using the information to scare him and gain an unfair advantage.

He returns in Season 2 as Gyujiro Japan and he defeated Jamira in the Duel Masters Battle Arena Tournament finals, but he is still evil. He tricked Hakuoh before their official match by kidnapping Mikuni and Makoto Aizen. Afterwards when he was not able to defeat Hakuoh in a duel, he injured Hakuoh so he would not be unable to duel him the next morning in the Finals. He ended up dueling Shobu again, but lost.

He is also working with Yumama. After he lost to Shobu, Yumama trapped him in a room with George. They both escaped inside The Battle Arena by digging themselves out and claimed to the crowd that she have been defeating the other contestants before the official duel just so that she can duel Shobu. This may have later affected his choices for his Duel Masters Land executives years later which were all consisted of men.

In episode 40, he was shown to be with Gyou in an abandoned factory. Like in the previous seasons, he still used his dirty tactics together with Gyou in order to sabotage the national tournament by disabling the other 3 finalists of the national tournament from the competition; Katta Kirifuda, Lucifer and Kojiro. He first targets Lucifer and had watched every move he had done and lures him in botanical garden greenhouse, weakening him with a series of traps after Gyou kidnaps Yohdel, Justice and Helen. He even adjusted the temperature of the greenhouse to made Lucifer uncomfortable during his duel against Gyou. However his plan was foiled by Katta and his friends, who arrived to help Lucifer after learning the situation, with Benchan hacking into the greenhouse computer systems.

In episode 41, it was revealed with Gyou that his plan on disabling Lucifer was a success. He was shown at the end of the episode with an evil smirk on his face after Lucifer fainted due to the poison. In episode 42, he and Gyou knocked down the surveillance guards in the tournament stadium to execute their plans. However, the poison he used on Katta does not work, much to his surprise. He then gives Gyou The=Deadbrachio, World Evil Dragonkind for him to use. After Katta defeated Gyou using Lucifer's card, he attempts to execute his second plan; to inject poison on Katta. However, Shobu was present watching the semi-finals arrived and knocked him down, stopping his evil plans once and for all. He got shocked to see that Shobu was still alive before losing consciousness.

Benny Haha returns in VSR after being seemingly defeated in VS as the mastermind of the Duel Masters Land conspiracy. While he does not appear directly for over half a year in VSR, the viewer is given numerous proofs that the Duema Land President is Benny Haha in some form or way. These include;

Eventually after Basara defeated the Duema Land President, Duel Masters Land collapses and Benny Haha is seen inside the robotic president, much to Katta and his team's shock. It is revealed that his real purpose of creating Duel Masters Land was to rule the world, destroy all duelists and take revenge on Shobu and Katta, who foiled his plans in VS. He then vows to take revenge on Katta and leaves.

In the few later episodes, he stays in his base, which is ironically a room in his house, to command Gyou and Zon-san to do his deeds. Gyou was later defeated and left him, while Zon-san was spirited to heaven after his defeat. He then plans his last scheme, the Duema sky as a last ditch attempt against Katta and his friends.

The location of his hideout was found out by Duemouse as Benchan was able to unlock his true memory. He reveals that his final plan was to activate the tower he had built to destroy duelists in the entire country. Duemouse decides to stop him in pursuing revenge. Benny took advantage of Duemouse's multiple summons by using Gyuujinmaru, Legendary Identity ability to give him an auto win. However his plans were destroyed again as Duemouse had prepared another countermeasure by planting a bomb onto himself in order to take the tower down with him.

A few days later, he disguised as Duemouse and kidnapped Katta's friends and Hamukatsu and strapped bombs on them and also (seemingly) killed Bucchake with one of them (however, Bucchake was shown to have survived and rescued the rest of Katta's friends, who did not know that it was him at first). Knowing that he has to end his insane plans of revenge that lasted for more than 10 years, Katta challenges him into a duel to return what his brother started.

In the end he was defeated by Katta's double Dogiragon combination. Katta grabbed him and seemed like he was going to punch him, but he just let him go to prove that dueling was not a tool of revenge (as Duemouse wished for). It seemed that Benny was going to turn a new leaf, as he returned to his home and rebuilt Duemouse in the attempt to reconcile with him. However, that was proved false, as he sent Duemouse to meet with Katta and he planted a bomb on him, proving that in the end he did not change at all.

Despite he has been seemingly defeated finally, the damage that he causes carried to the next season in the form of Basara and the Rare Killers and threatened the end of the world. With Katta finally destroying The final form of the forbidden card he unleashed, he also indirectly and unintentionally wiped out all Dragons in the creature world, and thus preventing Joe Kirifuda and Deckie from creating any Dragon or Dragon-like creatures in the near future.

He is seen exiting a beef bowl store at night along with Duemouse which attracted Kojiro's attention due to the smell of the beef bowl.

In the final duel between Basara and Katta in VSRF, he is seen watching the final battle on television with Duemouse.

He dueled against Shobu and was defeated in a game of Magic: The Gathering. In the manga, he was introduced the same as Mimi's brother and a White Soldiers member.

In Shobu's memorial after he saved the world from Adam, he attended the memorial wearing funeral clothes.

He first uses a Water Civilization deck in his duel in the Temple against Shobu.

Deck 1
He evolved his previous Water Civilization deck and made it stronger.

He uses the same cards as the one in his Duema Land President alter ego. 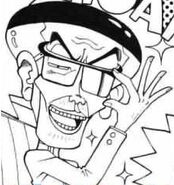 In Duel Masters Versus along with Gyou. 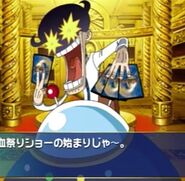 Duel Masters: Birth of the Super Dragon.
Add a photo to this gallery

Retrieved from "https://duelmasters.fandom.com/wiki/Benny_Haha?oldid=418469"
Community content is available under CC-BY-SA unless otherwise noted.