Beast Folk is a race of creature in the Nature Civilization.

Beast Folk creatures often have names featuring Weapons in their name such as Knife, Sickle, or Axe.

Many also feature feature full card names in Kanji with Katakana above, similar to Giants. They each have "の" in their name, seen as "___の___".

In the OCG, all Beast Folk evolution creatures have "大勇者" (Dai yūsha) meaning "Great Hero" in their names.

Beast Folk are the most popular race in the Nature civilization. Strong and brave, they excel in the use of close-combat weapons such as axes, clubs, and swords. As Nature world's most powerful warriors, some are equal in strength to Armored Dragons of the Fire civilization.

Beast Folk vary in appearance, determined by their ancestry. Those with common genealogy and similar heads maintain friendly relations with each other, and are known to collaborate in times of war and peace. On reaching adulthood, Beast Folk tattoo their bodies with symbols that represent their ancient ancestors. In their search for spirituality, they turn to the sky above the canopy. They imagine that a paradise exists above them, as evidenced by the many staircases they have built in the trees. Many Beast Folks have their own weapons.Those Beast Folks tend to specialize in their own style of fighting. As for those Beast Folks who do not use weapons specialize in their own style of fighting for example karate.

The weakest Beast Folk are Torcon & Bronze-Arm Tribe, only having 1000 Power. The strongest Beast Folk in Duel Masters are Quattro Fang, Super Gang Leader, being in 9000 power and is also a complete upgrade of Fighter Dual Fang. Quattro Fang, Burning Soul can become stronger with Hunting, however. The strongest non-evolution mono-Nature Beast Folk (not counting Kaiman, Temporal Flower, which is a Psychic Creature) are Assault Champion, Rose Sorcerer, and Zetsu Gowan, Savage Fairy among others with 4000 power, while the strongest multicolored Beast Folk is Paloro, God of the Cycle with 5000+ power.

Although there is no Beast Folk creature with the mana cost of 1, Beast Folk are able to evolve quickly on the third turn with Barkwhip, the Smasher to quickly swarm your opponent. In later turns you can choose to evolve other Beast Folk into Quattro Fang, Super Gang Leader.

Beast Folk are one of the most mana efficient creatures, usually having cost proportional to their power like in the case of Snow Shunfist, Savage Fairy, Fear Fang between others, however this come with disadvantages, most Beast Folks do not have a stable power higher that 3000, and the ones that get it higher are evolution, power attackers or hybrid creatures, so likely the best strategy to consider when using Beast Folk is to try to summon many of them in swarm to try to overwhelm the enemy, some of them even enforce those tactics with cards like Mighty Shouter who give themselves has Mana when dying or Silver Axe who creates Mana when it attacks.

The race also features multiple creatures such as Bronze-Arm Tribe or Dreaming Moon Knife who have effects that add cards from the top of your deck or your hand into the mana zone.

During the Dragon Saga, they appeared as Beast Folk Go.

Creatures that evolve from Beast Folk 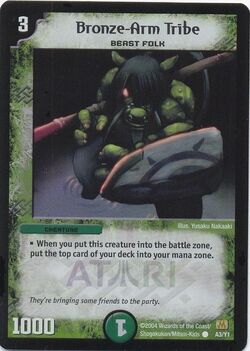 Retrieved from "https://duelmasters.fandom.com/wiki/Beast_Folk?oldid=351668"
Community content is available under CC-BY-SA unless otherwise noted.