Armorloid is a race of creature in the Fire Civilization.

Armorloid creatures have (Kami-hei) in their name, referring to a Soldier that has been dispatched by a god or under their protection. This could be seen as "Divine/Godly Soldier".

Armorloid creatures that have multiple races often have (Kidō) meaning "Mobile" in their names.

Armorloids are an advanced robot race created by Humans long ago before the Ancient War. Today's technology provides no way to repair them; consequently the number of robots is declining.

Only Human Commanders, who are keepers of the Ancient Art, can direct Armorloids. Some Armorloids can be combined for increased firepower.

Stories abound of an ancient city where many self-restoring Armorloids live, practicing and preserving the lost knowledge of Ancient War technology.

Creatures that evolve from Armorloids 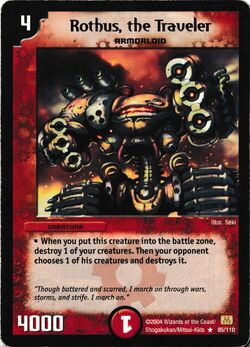