Arc Seraphim is a race of creature shared between the Light and Nature civilizations.

They are humanoid in figure, while also looking half-beast and often featuring wings.

Unlike the other 4 Hybrid Races, the Arc Seraphim do not have an active role in the story of Phoenix Saga.

10000 years after the events of Reincarnation Saga, Angel Commands descended to the earth and developed human-figures to repair the devastated earth.

In Episode 3 they were converted to the Oracles along with other races.

Non-evolution creatures have (Rei-ki) meaning Spirit Knight in their names, even for creatures with multiple races.

Evolution Creatures have (Seitei) meaning Holy Emperor in their names, and usually have a chariot as the lower part of their body.

Some of the Light civilization creatures are based on buffing the other Arc Seraphim.

While creatures with this race range from a Mana Cost of 2 to 9, most creatures only have between 3000 and 5000 power.

These cards are supported by Arc Seraphims

Creatures that evolve from Arc Seraphim 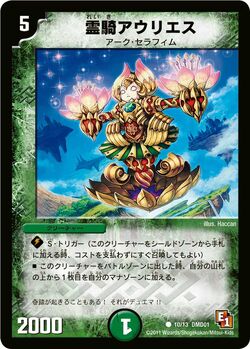