Apollonia Dragon is a race of Dragon creature in the Light Civilization.

The most well-known creature of this race is Spell Del Fin, Light Divine Dragon, which is popularly used against Psychic Creatures and decks that use many Hyperspatial spells, in order to stop them from being cast.

Creatures that evolve from Apollonia Dragons 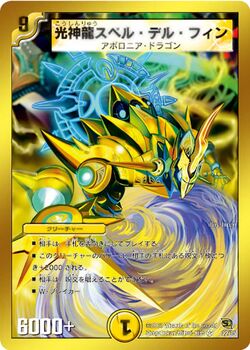