Like Angel Commands before them that featured (Seirei) Elemental in their names, this race features (Seireiryū) Elemental Dragon instead.

Evolution Creatures
(These creatures may not evolve from their respective race.) 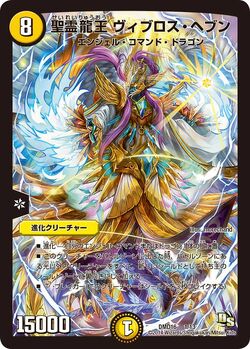 Retrieved from "https://duelmasters.fandom.com/wiki/Angel_Command_Dragon?oldid=295324"
Community content is available under CC-BY-SA unless otherwise noted.