2016 Calendar is a race of creature shared between each of the 5 civilizations.

They are a group of Quasi-Vanilla and fully-Vanilla creatures that each feature a 2016 calendar month as their flavor text. They all have a cost and power corresponding to the month they represent, e.g.: June, the 6th month costs 6 and has 6000 power.

As a result, they are among some of the creatures with the worst power to cost ratio in the history of Duel Masters as they were designed as joke cards for the Black Box Pack.

All of them have 3D images of famous creatures of Duel Masters such as Bolmeteus Musha Dragon and Ballom Emperor, Lord of Demons as their artwork. The artwork on the cards is the same as the art and order used for the 2009 calendar.

Each of them features a number from 1 to 12, and (Gatsu) in their card name referring to the 12 months of the year in the modern-day Gregorian calendar. 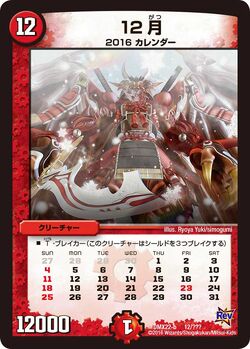