??? is a race of creature in the Water Civilization.

They appear as machine-like creatures with a humanoid creature controlling it in the inside. All of them have traits that resemble Benny Haha.

They are fairly unique in their own ways with a unique effect. For example, Unidentified is the first Water card in the game whose name consists completely of kanji, and allows the player to spam all the creatures in their hand with a serious demerit that can be get around with the correct cards, and Completely Unidentified which has the ability to skip the opponent's turn if he uses a card, puts a card in his mana zone, or attacks, completely locking down the opponent.

Despite ??? is actually The Answer, all cards that specifically affect either do not affect the other.

They are a mysterious group of underground researchers who created the Invader virus and spread it around the world.

It was later revealed that the ???'s true identity is The Answer, which is a race of evil scientists that created Invaders with their astounding bio-technology levels and used it to dominate the world. 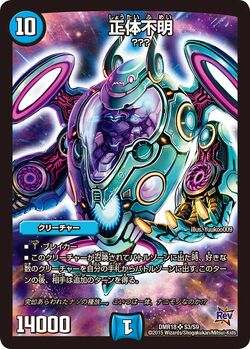 Retrieved from "https://duelmasters.fandom.com/wiki/%3F%3F%3F?oldid=371394"
Community content is available under CC-BY-SA unless otherwise noted.